The Abrolhos Archipelago is a Marine National Park located 45 miles
off the mid-eastern coast of Brazil. The archipelago of five volcanic
islands harbors the greatest chains of coral reefs in the South
Atlantic spreading across more than 9 million square yards. The ocean
around Abrolhos also covers one of the rarest and most exhuberant
coral reef banks in the region. According to scientific knowledge,
there is no other place on earth where you can see the type of coral
reef pinnacle prevalent in Abrolhos waters, locally known as
“chapeirão” [sha-payr-an-o]. The species looks like a giant mutant
mushroom and is overgrown with fans of fire coral and round knobs of
brain coral also unique to this archipelago.

Abrolhos is also home to some of the richest coral in Brazil, and one
of the rarest in the world. All the existing species of fish in the
South Atlantic can be found in the surroundings of the archipelago.
Between July and November, Abrolhos is visited by Humpback whales, who
give their own spectacular performance leaping from the water and
emitting a variety of sounds. One of the rarest species of endangered
mammals, they measure up to 50 feet and weigh around 30 tons. Abrolhos
is the only area in the South Atlantic to which the whales go in order
to mate, give birth and escape the Antarctic winters. They are in the
archipelago for their entire mating season. The male whales meet the
females again and try to attract them by serenading the ladies with
all kinds of sweet songs. The Humpbacks are considered to be the most
docile of all whale species, and are also known for their
highly-developed communication and acrobatics. That makes for a
perfect whale-watching-or-hearing opportunity, whether it be while
touring on the topside or diving down under. In the interest of
preserving the whales privacy and ensuring their annual return,
tourists must maintain a distance of 330 feet from the whales.

Charles Darwin was attracted by the rich fauna and paid a research
visit to the archipelago in the 1830s. Today, you are allowed to dive
in these turquoise blue waters, provided you are in the company of a
guide. There are so many spectacular sights in the archipelago’s coast
that it is almost impossible to pick the best dives.

The Italian cargo ship sank in 1955. It is approximately 330 x 44 feet
and its bow reaches up above the water surface at low tide as it is on
a higher incline. At the 66 foot bottom, the ship sits on a coral reef
bank between two “chapeirão” pinnacles. Today, the ship is completely
preserved and integrated into the rich surrounding coral reef
ecosystem. There are fish and “chapeirão” everywhere. Rosalinda
carried beer and cement. At least, the cement will still be in sight
for sure. As you move around the 3 accessible cargo rooms, do not be
alarmed if you see a 550 pound jewfish that tends to spend seasons in
the machine room. Although it is huge, it does not hurt anybody. Of
course, the same is true for the large turtles that also like the area.

How to get there:

There daily flights from São Paulo and Rio de Janeiro to Porto Seguro.
Porto Seguro is 164 miles, approximately 4 hours drive, from Caravelas
which is the main port for Abrolhos from the mainland. Caravelas has
well equipped hotels, guesthouses, restaurants and travel agencies.
You can also reach the archipelago leaving from Nova Viçosa, Alcobaça
or Prado on a sailboat or motor boat.

Best time of the year for diving:

If you want to see the beautiful Humpbacks whales your best bet will
be to travel between July and November. 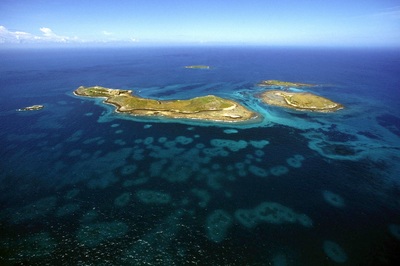 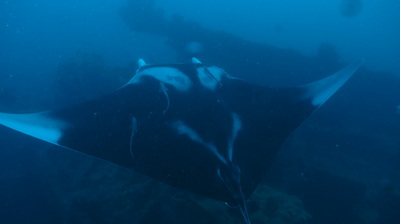 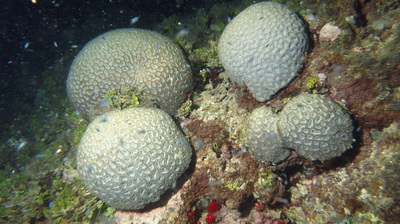